The draw saw Canada immigration authorities (IRCC) return to its regular Wednesday slot after the previous two draws that held on a Monday and a Tuesday.

An Immigration spokesperson said the move away from the usual Wednesday draws was due to system maintenance requirements.

This was the fifth consecutive draw in which 3,600 invitations were given out. Canada’s immigration authorities have now invited 59,800 applicants in 2019, as against a high-skilled immigration admission goal of 81,400.

The draw saw the tie-breaking rule carried out on August 23, 2019, at 9.33am EST. If more than one applicant had the minimum CRS score, only those who filed their Express Entry profiles prior this date and time get invitations.

This was the 125th overall draw and the 18th round of invitations under Express Entry in 2019.

What is the Express Entry System?

Stakeholders anticipate nearly Thirty (30) draws and more than 80,000 invitations sent out in 2019, with most of the draws featuring CRS scores below 460 to allow the Canadian immigration authorities to meet the set annual immigration targets for 2019. 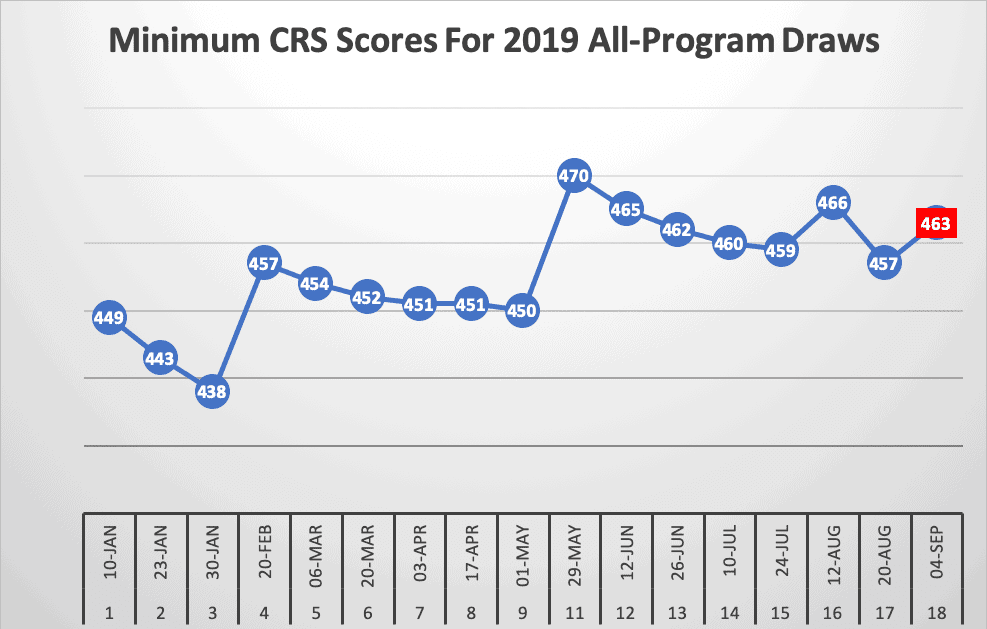 Your Express Entry profile will acquire points based on the following:

Extra points are also given if you have completed a university and college program in Canada or if you have secured a provincial nomination.

How Does Express Entry Choose People for PR?

Once you create and submit a profile, your profile will be entered into a pool (group) of all the applicants who have currently applied under Express Entry.

You will then be ranked accordingly against other people in the pool. Your ranking is calculated based on the number of points you obtain.

If you are at the top of the rankings, your profile will be nominated or selected from the list of applications. You will then receive an Invitation to Apply (ITA) for Canadian permanent residence as a skilled immigrant.

IRCC has an up-to-date notice about the number of ITAs being sent out and a minimum number of points you require to secure an ITA.

What Can Employers Do to Recruit Foreign Workers?

Employers are required to consider obtaining an LMIA or nomination under provincial nomination programs (PNPs) to effectively guarantee long term retention of employees.

What Candidates Are Expected To Do Next?

It is anticipated that the majority of candidates to be granted ITAs in 2019 will need a CRS to score well under 460 points, enabling a good number of candidates to receive Canadian permanent resident without a job offer or nomination under a provincial nominee immigration program. But, obtaining a valid job offer is highly recommended.