Canada saw a fifty (50) per cent increase in the number of candidates transitioning from temporary to permanent residence between 2016 and 2019.

Recent figures show nearly 75,000 temporary immigrants became permanent residents in 2019, up from under 50,000 three years before.

It shows that temporary residents – particularly those residing in Canada through the International Mobility Program (IMP) – are a major source of new immigrants.

Since 2016, Canada has seen consistent annual increases in the number of candidates transitioning from temporary to permanent residence.

This shows that as the federal government has pursued its policies of managed immigration increases, the number of applicants making the transition from temporary residence has increased accordingly. 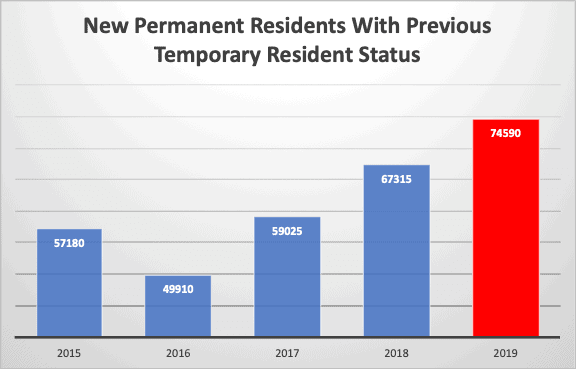 Breaking the statistics down by temporary residence program reveals that the vast majority of candidates making the transition to permanent residence first came to Canada through the International Mobility Program.

Government figures show that seventy-seven (77) per cent, or more than 57,000, of the total for 2019 had previous temporary status through the IMP program.

The IMP program allows Canadian employers to hire foreign skilled workers on a Canada work permit without the need for a Labour Market Impact Assessment (LMIA).

Increases in numbers transitioning from the IMP have surpassed the overall figure.

The numbers show sixty-five (65) per cent more permanent residents transitioned from the IMP in 2019 than did so in 2016, compared to forty-nine (49) per cent overall.

Given that IMP candidates are exempt from LMIA conditions, it follows that they are also more likely to have the kind of requirements to allow them to qualify for permanent residence.

By contrast, the number of candidates transitioning to permanent residence who came to Canada through the Temporary Foreign Worker Program has dropped since 2016.

However, the 2019 number was up twenty-four (22) per cent on the previous year, surpassing a four-year decline in transition figures for the TFWP category.

Increases in numbers of Study Permit holders, meanwhile, have gone through the same pattern as the overall numbers.

This tallies with the federal government’s policy of attracting international students to stay and build their careers in Canada after graduation. As long as this policy continues, these figures are set to rise significantly.

They are educated in Canada, young, have the required language abilities, often have Canadian work experiences and knowledge of Canadian life. This to a great extent increases their chances of transition and integration into Canadian society.