Canadian citizenship tests suspended due to the COVID-19 should resume either online or in-person, according to anxious candidates.

Candidates are worried the suspension of citizenship tests put in place to contain the spread of coronavirus will mean a backlog of cases that seriously delay the process of becoming a Canadian citizen.

The number of people becoming citizens has dropped since coronavirus restrictions were put in place in March.

In the month of February – the last month unaffected by the coronavirus – Canada saw 26,730 people become citizens, compared to just only five people in April when the strictest measures were in force.

The numbers have since gone up slightly – with 1,656 new Canadian citizens in June – but they are still significantly low on what would be the norm without COVID-19. 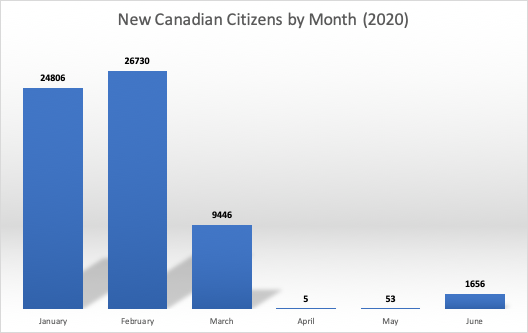 Now candidates are questioning why schools have been allowed to resume lessons, but citizenship tests remain suspended.

They want to see Canada immigration ministry resume tests either online or with physical distancing.

Candidates are avidly aware that the longer the suspension remains in force, the longer they will have to wait for a test date when travel restrictions are lifted.

The pre-pandemic processing time for an entire citizenship application was around twelve (12) months. The current processing times, and what it could be when full processing eventually begin, is impossible to predict.

Canada has begun holding virtual citizenship ceremonies, which resulted in the small uptick in the table seen in June. But the citizenship test, for those further back in the process, is yet to resume.

All tests, re-tests, hearings, and interviews have been temporarily suspended for six months, since March 14.

Meanwhile, another group of Canadian permanent residents who are eligible to become citizens is dillydallying over the federal government’s promise to cancel the citizenship fee.

Prime Minister Justin Trudeau’s Liberals made a pre-election pledge in 2019 to cancel the $630 fee associated with acquiring Canadian citizenship.

Since the pledge was made, the coronavirus pandemic has taken grip in Canada, with IRCC forced to step in and provide financial aid to many who lost their jobs due to coronavirus restrictions.

Now Canadian permanent residents are reluctant to file citizenship applications as they wait for news on the Liberal promise to waive the application fee.

The current $630 fee includes a $530 processing fees – increased from $100 under the previous Conservative government – and another $100 ‘right of citizenship’ fee.

Despite cheaper processing fees for children, a typical family of four would have to pay $1,460 for their citizenship, provided they met other criteria.

Candidates are required to have been living in Canada as permanent residents for at least three years out of the last five. They have to also pass a citizenship test and meet the citizenship language requirements if aged between eighteen (18) and fifty-four (54).

Share
Previous Immigration Policy For Newcomers in United States, USA
Next What Employment Services Do Canadian Employers Expect From Newcomers?