The Federal Express Entry System Has Invited Record 11,700 Candidates For Canada PR in the month of October alone. It is likely to invite more than one million immigrants in next three years.

Federal Express Entry System is without doubt the most popular online point-based immigration system in the world. It’s also the most efficient economic immigration program that has clear-cut and precise instructions and policies.

It’s surprising how it invites just under one year applicants every year to apply for Canadian Permanent Residency, through a smooth procedure, with no hassles or stress.

In spite of the fact that, the Immigration Refugees and Citizenship Canada didn’t make any big reduction in the qualifying marks or CRS score requirement, but, the number of invites the Express Entry system was able to send this year is incredible.

This shows increasing popularity of EE system as more and more people are applying for this program all over the world.

If you look at the amount of people being invited for Canadian permanent residency via express entry every year, the figure is staggering. Records shows that the Federal Skilled Worker Category of Express Entry invitations has been exceptional. Let’s take a look at the chart below.

These obviously is the highest number issued in any calendar month till date. There have been Three draws in the previous month, but, no month witnessed such a large number of invitations issued by Immigration Refugees and Citizenship Canada (IRCC) in October 2018. Take a look at the table below.

The most amazing factor in the year 2018 was that IRCC was able to issue huge number of Canadian PR invitation without even making any substantial reduction in the CRS score criteria of qualifying marks.

Thanks to several relaxation made available by the IRCC in the last couple of years, which have made an increased rate of people eligible for Canadian PR.

This is best time to apply for Canadian PR with Canada planning to invite a good number of applicants through express entry and other provincial nominee programs of Canada. 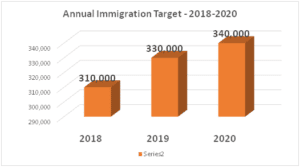 Based on the multi-year immigration plan (2018-2020) of the federal government of Canada, it is likely to invite up to one million immigrants in next 3 years.

But, now is appropriate time to apply for Canada PR, when the government is accepting the skilled and talented people with open arms.