Top 10 best places and times to visit Bhutan this year

Are you planning to visit Bhutan this year? If yes, you should check out these top 10 places and times to visit this beautiful country.

The Himalayan Kingdom of Bhutan has become a tourist hotspot over the last decade. Its pristine natural beauty, friendly locals, and rich culture have made it a favorite destination for travelers from around the globe.

Bhutan is located in South Asia and shares borders with India, China, and Nepal. Also, this tiny country is home to some of the highest mountains in the world. Thimphu is the capital city known as the “Little Lhasa of Bhutan” because of its Buddhist temples and monasteries.

Undoubtedly, there are plenty of reasons why you should visit Bhutan. From trekking to exploring ancient temples, there is something for everyone. Here are the top 10 places and times to visit this year.

Top 10 best places to visit in Bhutan this year

If you want to see some of the best sights in Bhutan, then you should plan. Here are the top 10 must-see places to visit.

Rinpung Dzong, a beautiful fort built in the 16th century and ornamented with glorious towering walls, is also known as the “fortress settled on a mound of diamonds.” It is one of the prominent tourist places in Bhutan, displaying traditional Bhutanese traditions and an excellent example of Bhutanese architectural wonders. Tshechu is an annual celebration observed in the country and lasts five days. Buddhist holy icons are transported, followed by mask dances performed by monks and mimicking many exciting stories.

The second largest Dzong in the kingdom of Thunderbolt, it is well-known for its magnificent structure. Punakha Dzong is one of the world’s best tourist places, dictating Buddhism’s exquisite customs, arts, and historical narratives, and should not be missed on a Bhutan sightseeing tour.

The Dzong, also known as Bhutan’s winter capital, is located at an altitude of roughly 1200 meters above sea level. The best thing is that no passengers experience oxygen shortage or height sickness at this high altitude, so they do not need to cancel their hiking plans.

Suggested:  Guide on how to apply for a Bhutan Resident Permit

This magnificent bridge was built across the raging Po Chu River and is the longest suspension bridge in Bhutan, stretching nearly 160 meters above sea level. The bridge connects Punakha Dzong to Punakha city and is a great photo opportunity.

Small and drowsy Jakar is located in the heart of the breathtaking Choekor Valley, dubbed “Little Switzerland” because of its sweeping vistas of fir trees and alpine slopes.

It’s a religious center and the gateway to the Bumthang District’s eastern beauty, and it is dotted with beautiful whitewashed monasteries.

The vast Jakar Dzong stands guard atop the town, marking one of the country’s largest fortified monasteries, while places like the Kurje Lhakhang below recount stories of the 8th-century Indian guru Guru Rinpoche. They helped bring Buddhism to this remote part of the highlands centuries ago.

It is undoubtedly one of the most respected religious locations, recognized for its reverence of the terchen monarch Pema Lingpa, one of the country’s major spiritual benefactors.

The magnificent monastery is a sight to behold, perched on a steep bluff of stone above the town of the same name (Gangteng Village).

Before hitting the famous trekking trails of the more expansive Phubjika Valley – the stomping ground of the uncommon black crane – check out the carved timber frontispieces and the glowering garuda gargoyles.

Trongsa, located in the nation’s center and attractively decorated with lush vegetation, is renowned for its allure and beauty. This setting is perfect for practicing yoga and meditation due to its simplicity, calm, and tranquillity. The location’s best feature is that it is relatively accessible from all parts of the nation and has excellent connections to Gelephu, Bumthang, and Punakha.

The famed Trongsa Monastery, which is tastefully designed with red roofs and whitewashed walls, is the main draw and is also recognized as the most prominent feature in the area. You can pass your free time in this valley by visiting several local marketplaces and purchasing some trinkets.

We’d like to know how many of you are familiar with Bhutan’s national animal. Motithang Takin Reserve is home to Takin species and is the top tourist attraction for flora and fauna enthusiasts. Takin, the country’s national animal, belongs to the goat family and can be found in sections of the eastern Himalayas. It is thought that these animals were first gathered in the 15th century by a well-known saint, and the Bhutan government is now in charge of maintaining them.

Suggested:  Bhutan Visa Requirements - Who and How to apply

The street is well-known for its numerous shopping malls and local businesses where you can buy apparel or other products like wine, woodwork crafts, and woolen garments. However, the concept of shopping here in the malls can burn a hole in your pocket, but you will undoubtedly find some fantastic and reasonably priced items, even if you are not in the mood to trek to Bumthang.

Thimphu, also known as the capital city’s artery, is a popular destination that sees a large audience annually. Try out several local eateries on the city’s busy streets, and you won’t forget the taste of the delicacies so fast.

This 169-foot-tall statue in Bhutan is located in the Thimphu foothills. This renowned and magnificent statue may be seen from anywhere in the country. This massive statue of Lord Buddha is crafted of gold and bronze and is one of the major tourist attractions in Bhutan. The play has a great religious value and a very particular place in each local; also, the roadsides are covered with flags.

The National Museum of Bhutan was built in 1968, above the popular Rinpung Dzong. The museum was built to display popular Bhutanese art and crafts. It houses about 3000 treasures spanning more than 1500 years of Bhutanese art and craft labor, ranging from ancient to current paintings. It is also the country’s photo gallery, with images from previous dance events and other ceremonies.

When is the best time to visit Bhutan?

As mentioned earlier, Bhutan is a tiny Himalayan kingdom in South Asia. The country has a unique culture and beautiful scenery. This country is known for its Buddhist temples, monasteries, and stunning landscape.

In addition, Bhutanese people are known for their friendly nature and hospitality. They welcome tourists from around the globe.

In those places we highlighted above, you’ll experience some of the most breathtaking views in the country.

Bhutan has four distinct seasons, each with its unique beauty and charm. In addition, Bhutan is an all-year destination. As a result, the duration of your trip is entirely up to you.

As numerous flowers begin to blossom in the spring, botanists rejoice.

And plants begin to bloom after their long winter slumber. Flowers like rhododendron, wild azaleas, and edelweiss carpet the meadows, adding a new sense of awe to Bhutan’s landscape.

Flowers are in full bloom, valleys are clothed in green, weeping willows span the banks of many rivers, and pine cones sparkle in the sun, so full of risen they are ready to tumble to the earth.

This is the time of year when the entire countryside becomes golden. Farmers harvesting their harvests in golden-colored paddy fields beneath bright blue skies is a breathtaking glimpse of Bhutan’s autumn countryside.

Winter has its ups and downs. The days are sunny, but the evenings can be cool. Cloud turfs slowly drape over mountain peaks as if waiting for new life to blast across the landscape. Bhutan’s winter season clearly shows the world’s tallest Himalayan mountain ranges coated in snow.

Yes, Bhutan will be available to tourists in 2022. However, because of the COVID-19 epidemic, some restrictions were in effect.

Thus, After being closed to outsiders for more than two years because of the epidemic, Bhutan has officially confirmed its reopening date, September 23, 2022. Since ancient times, the beautiful Himalayan nation has drawn visitors from all over the world.

Is July a good month to visit Bhutan?

Yes, July is a great month to visit Bhutan! The weather is perfect for hiking and exploring the outdoors, and the scenery is stunning. But, of course, you’ll want to bring your camera along to capture all the beauty.

Is Bhutan good in May?

Usually, May in Bhutan offers rising humidity, a larger chance of rain, and the possibility of cloud cover at high altitudes. However, the more considerable rains do not usually occur until June. As a result, the number of visitors dropped significantly this month, making May a good time to visit Bhutan.

Is Bhutan good in April?

Bhutan is a great place to visit any time of year, but April is especially nice because the weather is warm and sunny. The flowers are in bloom, making for beautiful scenery. And, since it’s not high season, you’ll have the place primarily to yourself.

What is the perfect time to visit Bhutan?

You can best visit Bhutan during the spring months of March to May. During this period, the weather is mild, and the flowers bloom. This is undoubtedly the perfect time to visit Bhutan.

In conclusion, Bhutan is a unique and welcoming place that should be on everyone’s travel list. There are many great places to visit and things to do, so be sure to do your research before you go. Traveling to Bhutan is an experience you will never forget. Guide on how to apply for a Bhutan Resident Permit 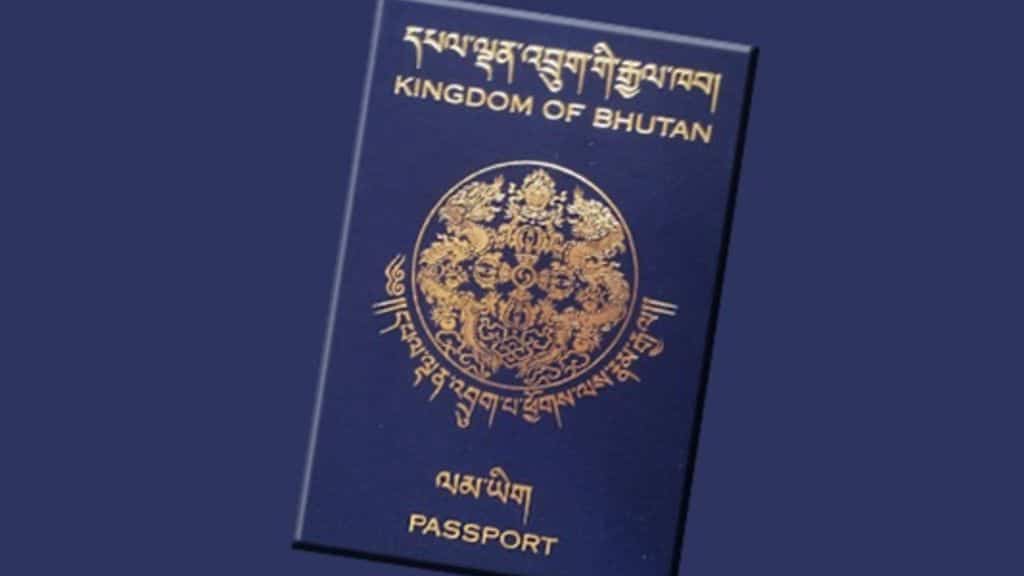 Bhutan Visa Requirements – Who and How to apply