Canadian citizenship candidates are calling for the resumption of knowledge tests suspended since March because of the COVID-19 pandemic.

Many permanent residents applying to become Canadian citizens have seen processing paused due to service restrictions caused by the pandemic.

But with many services resuming either in-person or online, candidates are now asking why the same doesn’t apply to the citizenship test.

Canada immigration ministry or Immigration, Refugees, and Citizenship Canada (IRCC) says online tests are optional, although there is no update on when they might resume.

There are also concerns over the integrity of online tests.

Canada requires all candidates aged eighteen (18) to fifty-four (54) to take the test, which includes twenty (20) questions on anything ranging from culture to the rights and responsibility on citizens.

Candidates for Canadian citizenship must also prove their knowledge of French or English, and meet physical presence requirement.

Under the present law, applicants must have three years of physical presence as a Canadian permanent resident during the last five years.

Meanwhile, some citizenship candidates are playing a waiting game over the government’s promise to waive the citizenship fee.

Prime Minister Justin Trudeau’s Liberal party made a pre-election pledge in 2019 to cancel the $630 fee related to obtaining Canadian citizenship.

Since the pledge was made, the Covid-19 crisis has taken a hold in Canada, with government forced to step in and provide financial assistance to many who were laid off due to COVID-19 restrictions.

Now many permanent residents are delaying to file citizenship applications as they are looking forward  for news on the Liberal promise to waive the application fee.

The current $630 CAD fee includes a $530 CAD processing fee – increased from $100 CAD under the previous Conservative government – and a further $100 CAD ‘right of citizenship’ fee.

Despite reduced fees for children, a normal one family of four would be reguired to pay $1,460 for their citizenship, provided they met other requirements.

As ceremonies was cancelled in the early part of the COVID-19 in Canada, the number of new citizens dropped in March, April, May and June, the most recent available figures show.

Just five candidate became Canadian citizenships in April, compared to the 26,730 in February the last month before COVID-19 restrictions was in effect. 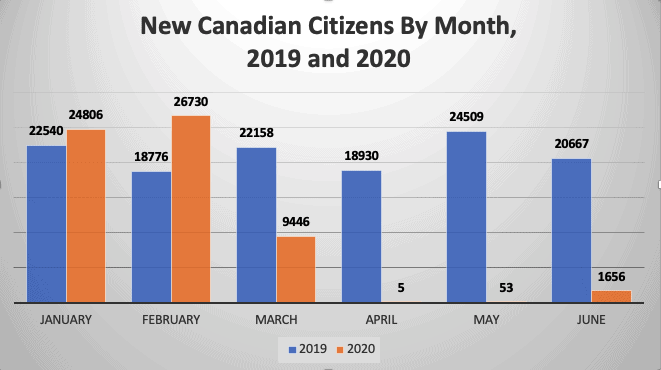 In the first half of 2020, 62,696 candidates became citizens, with more than 50,000 doing so in month of January and February, before coronavirus hit took hold of Canada.

What do you think?

Back to Top
Close

Your password reset link appears to be invalid or expired.

To use social login you have to agree with the storage and handling of your data by this website.